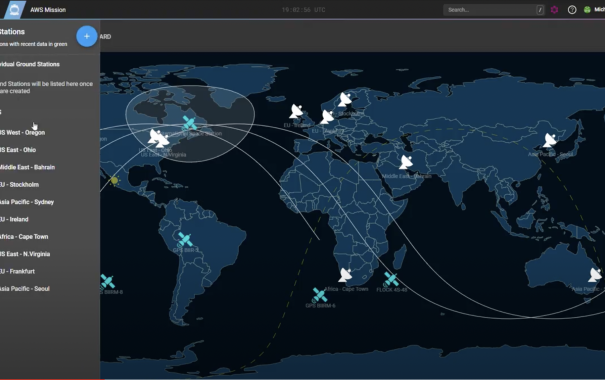 “As a truly cloud-native Mission Control solution, Major Tom has a strong foundation built on AWS. This collaboration with AWS Ground Station is a direct response to the demand from customers to allow for flexibility and scalability in their ground control operations. By leveraging AWS Ground Station, our mutual and new customers will now gain a new level of flexibility for scheduling contacts,” said Tyler Browder, CEO of Kubos.

The wide-scale adoption of Major Tom by global customers with vastly different needs has been driven by a quickly changing space environment with lower and lower barriers to entry. Missions running on the software range from picosatellites, which are less than 1kg, through traditional-sized satellites and from small with a single satellite to full-scale constellations. Major Tom users, regardless of mission profile, will now be able to add AWS Ground Station to their mission control.

Major Tom gives customers a modern interface that scales with the size of their mission and offers the ability to choose from multiple ground station networks without leaving the web application. Traditionally, mission control had to send emails or use multiple systems to schedule contact time with their spacecraft – neither of which met modern needs or budget constraints. Today, scheduling contacts can be done via a web browser with Major Tom and new ground station network providers can be easily added.

“The ease of seamlessly integrating with ground network providers such as AWS, as well as their own proprietary networks via our Gateway API, gives our customers back time to do important work on their orbital missions,” said Simon Halpern, Chief Operating Officer at Kubos.

Kubos Corporation provides ground control software and ground network integrations with its flagship product – Major Tom. Major Tom is a protocol-agnostic system control software that is cloud-native. Customers and users include US and international commercial, civil and defense companies, with satellites ranging from under 1 kg to CubeSats, SmallSats, space tugs, and large, multi-ton spacecraft. Major Tom is ideally suited for customers with satellite constellations as well as legacy systems migrating from on-premise to the cloud. Kubos was founded in 2014 and is headquartered in Lake Oswego, Oregon with remote employees across the US. Visit kubos.com for more information.